This weeks post ties in with my last post of How do you know you are doing a good job? Make no doubt about it, multi-paddock grazing greatly improves the soil while increasing your carrying capacity and your bottom line. Just how does multi-paddock stack up to building  and using herd instinct in your cattle?


The claim is that moving fences is easy, and in many cases, only takes a few minutes. At roughly 3:58 in this video, the man explains that it takes him 18 minutes to run the wire for his electric fence, then he has to move the cows. Later he says he is doing this up to five times a day. That may not sound like much until you start adding up the time.

That is an hour and a half a day or 45 hours a month during the growing season. Where he is, that is roughly 5 months,or 225 hours. Of course this does not take into account drive time, or fixing fence, or the cost involved in posts wire, chargers and moving portable water points etc.


Using herd instinct to his advantage, and increasing his pastures to 100 acres would give him roughly 20 days feed. Time spent to have cattle graze in exactly the same manner would amount to going out once a day to check on the cattle by simply going to the front and having the cattle walk past him would be roughly 20 minutes a day.or the equivalent of 5 work weeks in other professions... Or one and a quarter month's vacation. Even figuring his time at only $10 an hour using herd instinct would save him $2,000 over the course of the growing season in time alone.

So the first question on everyone's mind is "What about herd density?" Not to worry, cattle behaving as a herd will graze at least as tight as when forced into it by fencing, if not tighter as in the following picture. 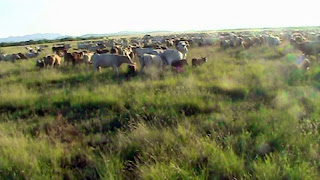 The above picture is a herd of 528 cows (many with calves) in a 200 acre pasture. They were this tight because they wanted to be this tight, not because they were forced into it. In the long run, the stress reduction of them wanting to be in a tight area vs being forced into one will result in heavier calves adding even more to your bottom line.
The second question is always "What about back grazing?" Why would there be? Cattle prefer fresh feed. In small pastures they will start on the perimeter and graze around. When they go to water, they will go back to where they left off to resume grazing. Once the have grazed around the pasture, they move in to the next strip on their own, continuing to follow the fresh feed, until there is no more fresh feed. At that time, simply move them into the next field.
For more information and videos, my website.
Posted by Bob Kinford at 9:39 AM 2 comments: