The Myth of Regional Neccessity 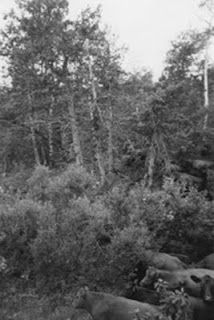 Recently a person asked the question if  there is a part in Texas where there is much of the Vaquero tradition going on.Of course the conversation expanded from horses, to handling cattle in various parts of the country.One of the opinions expressed was that cattle in Texas, because of their breeding, big pastures and brush, are wilder than cattle in other parts of the country. Having worked on ranches from California east to Nebraska, and from the Montana/Canadian border, south to Texas I have come to the realization that the only reason cattle are wilder in one are that the other comes down to the way cattle are handled.

While it is true that the longer cattle go without seeing a person horseback, the stronger their flight response will be when they are gathered and worked. However part of the process of taking care of cattle is actually going through them from time to time. If you do this, and handle your cattle in a way they understand, your cattle will not be trotty and run off every time you gather them.
A big (Ok, VERY big) part of the problem people have in areas claiming they "have" to handle cattle in a hurry is that they are pushing cattle too hard on the way to the pens, then pressuring them too much when they get there. In the above picture five of us were moving over 600 pair to a summer pasture of around 5,000 acres. There were a few clearings, but most of the summer lease was just like in the picture. Rather than just ignore them all summer, I rode them once a week (twice if I was lucky). That fall the five of us went back in and gathered, driving them right back through the brush and accounted for every single head.

This brings us back to "regional necessity" of having big crews to handle one or two hundred head at a time. If that is really necessary, you should be looking closely at your herd management and the way you are handling your cattle. Bigger crews add to outputs, as does unnecessary shrink from cattle that are trotty to gather. I've been on ranches that were either still open range, or had pastures as big as fifty thousand acres with cattle that were easy to handle, just because people made a point of riding through them from time to time. It all boils down to the fact that if your cattle are trotty and run off, it is because of the way you manage and handle them.