This project is on 3,500 acres in far west Texas. 1,900 acres had been previously farmed under center pivot irrigation with the remaining 1,600 acres being native desert. The pivots were used for intensive grazing between 2003 and 2009 with the pivots planted in Bermuda and fertilized with anhydrous ammonia. In June of 2009 the place was leased with an option to purchase to a couple of brothers who planned to raise high quality Teff grass which couldn't compete with the Bermuda. By 2011  the lease passed on to a crop farmer who annually sprayed chemical to kill the Bermuda. In 2017 they gave up the lease, which was picked up by another crop farmer in 2018, who planted, then ran out of money to irrigate and abandoned the place.

Late rains in 2019 brought on a bumper crop of tumbleweeds, at which time I was asked to see if I could graze them out in October of 2019. To graze it right would have required 1,000 calves for 4 to 5 months, but (not realizing dormant tumbleweeds can be 17% protein and 46% TDN) there weren't people interested.  I received 145 head of calves on November 3, averaging 435 pounds.As you can see in the picture below, it would have been impossible to just build temporary fences, so I rebooted their herd instinct and let them graze paths through the weedd. In January another 130 calves which were not weighed. The calves were shipped out on June 1,2020 with half of the first set averaging over 700 pounds, with no supplemental feeding. There were also 78 pregnant cows brought in on March 1st and shipped out on September 1st, then another 83 cows brought in on October 1st (of which 59 were shipped out in April. There were an additional 22 head of Corriente cows run seperate which were fed (on top of standing tumbleweeds) from October through June. 2020 saw an average rainfall of under 3", with no measurable precipitation between July of 2020 and the 24th of June 2021. Between June 24th, 2021 and July 15th, there was an average of 5" of rain across the entire property. 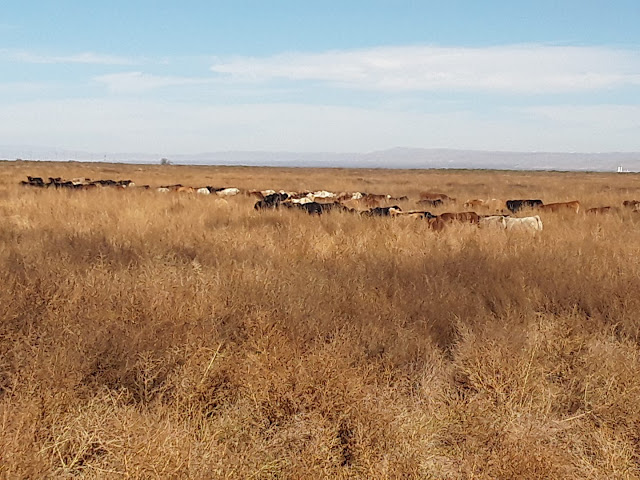 As you can see from the above photograph, the tumbleweeds were dominant over the 11 abandoned pivots. With the low stocking rate, I was only able to get proper impact on parts of the pivots. As you can see, there is a big difference, mainly in the areas where I managed to get heavy enough impact by spraying year old tubleweeds with molasses. 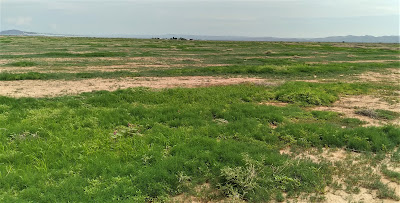 Reading the ground to see how impact was distributed is easy in the above picture. Grasses and weeds are thickest where the most impact was. Lighter impact from grazing has a few weeds and no grass, while the areas the tumbleweeds blew away are bare. The lower picture is looking at another pasture, in an area the cattle tended to bed down together as a herd.

The next picture is on a flat in the 1,600 acre desert pasture in August of 2020. The tracks in this picture are the results of cattle walking back and forth between water and feed in a group. 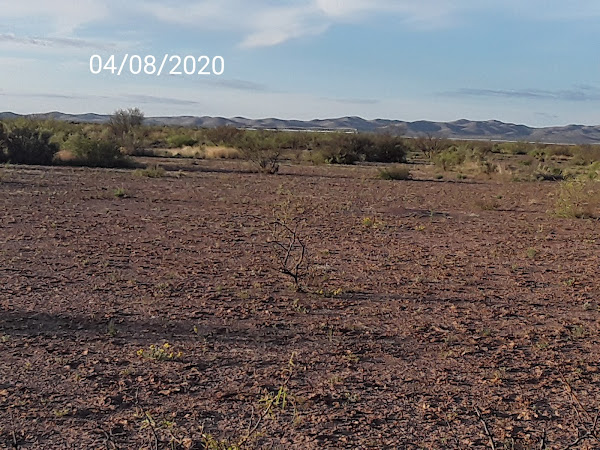 This next picture is a wider view of the same flat on July 24,2021 after 5" of rain between June 24th and July 15th. In addition to several broadleaf weeds there is Bermuda, Feathery Rhodes Grass, Johnson Grass, and perinnial Rye.

The lack of cattle during the first 20 months of this project has left large piles of tumbleweeds. Now that it has greened up (and starting to rain again) I'm experimenting with wet burns. The next picture is of one the weed piles after receiving 0.4" of rain the night before. Too wet to burn in the morning, but by early afternoon dry enough to set on fire. As you can see in the bottom picture, there was enough moisture to keep it from burning to the ground, leaving ground cover, but taking enough so that the ground isn't completely protected from the sun. Last week I burned some dry piles, so next month will be able to compare the response difference between the two styles of burning.

The plan now is to wait until the tumbleweeds are mature and their protein levels drop to 20% and stock for the winter with between 600 and 1,000 calves, take them to 800 pounds then destock until the rains hit, and we see what the changes are.
Posted by Bob Kinford at 9:15 PM 2 comments:

With Amazon discontinuing production of disc formatted video at the end of May, I have the options
of spending funds to convert Stockmanship 101 to a streaming format, or produce a new and
improved video. After careful consideration I have decided to go with the latter. As YouTube and
other sites now allow full length feature films, Stockmanship 102 will be free for anyone to watch.
I will once again be teaming up with Andy Horton of Malpache Media for this project. Rather than
working with a small herd that blends in with the desert brush, we will be rebooting herd instinct in
1,000 calves on green Oklahoma grass. Between the contrast, improved drones and cameras, this
video will be much more definitive than Stockmanship 101, and will cover more of the
horsemanship as well as grazing strategies. Individuals donating to the project will receive their names
in the credits, while non profits and companies will also have their logos displayed with link to their
websites. For more information on how to help with this project, please visit out GoFund page.

People have asked why I like to look at grazing days over stocking rates. By converting from the traditional stocking values of AUM' (to grazing days) it gives us a more precise measurement of how much we have actually grazed, and a better idea of how to plan for the future, especially on diverse rangelands where we need to be flexible with our grazing plans. For example, the project I've been working on for just over a year, is in an area where, under conventional management, the stocking rates are between 90 and 100 acres per cow. Fiuring the higher stocking rate of 90 acres per cow, this would rate the 3,500 acres I'm working with at 38.8 cows or 466.6 AUM's.By multiplying the number of cows it is rated for by 365, we come up with 14,162 "grazing days." Approximately 1,200 acres of this property is abandoned farmland which when I took over management was dormant tumbleweeds. While most people look at dormant tumbleweeds as something with no feed value, the reality, shown in the forage test below, is that they retain a fair amount of feed value even a year later.

The farm ground had contained center pivots, all but three fenced into quarter sections. 275 calves were cusotm grazed on five of these field for 151 days. Figuring a calf at 0.7 animal units, each day amounted to 192.5 grazing days for a total of 29,067 grazing days On March 1st, we brought in an additional 78 heavy cows and two bulls which were calved out, then the cows were sold on the 3rd of September. The 80 head for 125 days added an additional 10,000 grazing days for a total of 39,067 grazing days. The first of October, another 81 head of pregant cows were received. They browsed dormant tumbleweeds from 2020, as well as tumbleweeds left from 2019 which were sprayed with a 36% molasses for the remaining 92 days adding another 7,636 grazing days to the year, bringing the total to 46,703 grazing days. In addition there were 60 head of cows grazed on the dormant weeds for 45 days, before being supplemented with hay, adding another 2,700 grazing days for a total of 49,403 grazing days. While 3.448 times more than the local average grazing days, the numbers would have been much higher if the owner of the yearlings would have had the confidence to send more cattle. In order to graze and trample the 2019 tumbleweeds to make room for new plants, it would have required 1,000 calves for six months, which would have amounted to 126,000 grazing days (0.7 x 1,000= 700 grazing days per day, time 180 days.) In turn, this would have increased the amount of forage grown for the year, which couldn't grow through the previous year's crop of tumbleweeds. The fact that it was a drought year, makes it more interesting. Out of a 12 inch average rainfall, most of the property had well under 4 inches of rain, yet, by being flexible enough to graze different areas at optimum times, there was some stockpiled grass at the end of the year, as shown below. This picture also demonstrates the complexity of diversity and recovery rates.

This narrow view contains three different grasses which received roughly 3.8" of by the yellow color. The Tabosia is next in line, nearly a foot tall, but didn't develop a seed head. This is followed by Alkali Sacatone, which didn't have near enough time or moisture to to fully recover. Just out of this picture was a fourth species, volunteer Bermuda, which had only grown about a half an inch. This presents the conundrum(s) of when is the optimum time for the plants to be grazed, in terms of both being the most benefical to the plants, as well as nutritionally optimal for livestock. What is largley ignored, forgotten, or not realized by most holistic/regenerative grazers trying to mimic wild herds, is that those herds were not continuously in megaherds, grazing at ultra high densities. Other than when both water and feed were at the peak, the megaherds were disperesed into sub herds, which were grazing the plants which were at their highest nutritional levels at the time they were grazing an area. Also seldom mentioned is that bison were not the only large herds of herbivores on the great plains. There were also large herds of elk, antelope, and deer grazing across the same lands. Depending on the year, a piece of ground may have been grazed several times a year, with different plant species being grazed each time. Typical holistic/regenerative grazing programs, utilizing small temporaty fences and frequent moves (especially those which move daily, or several times daily) ignore the need of different plants at different times. Rebooting herd instinct, and using Instinctive Migratory Grazing (IMG) practices, grazers are able to adjust grazing patterns to take advantage of plant diversity which is optimum for both plants and animals. By adjusting in this way, you are allowed to run more cattle at a higher than "normal" density, determined by the cattle while providing more stockpiled grass, as explained by Riki Kremmers in this podcast.
Posted by Bob Kinford at 4:59 PM 1 comment: