Weed control. Radio advertisements in farm and ranch country are full of ones pushing weed control through chemical herbicides. Social media boards are full of discussions on how to control weeds by non-chemical methods including burning, grubbing and ripping. Often, at the same time ranchers are trying to figure out how to control the weeds, they are spending money on supplemental protein.  What if these weeds that "cattle won't eat" are the solution to reducing supplemental feed outputs?

As it turns out, the same stresses we have placed on our cattle that prevent them from acting as a herd, has also narrowed their natural dietary intake. As we change our stockmanship methods to allow the rebooting of herd instinct, cattle widen their diet, often before herd instinct is completely rebooted. A partial list of plants they begin to eat is common ragweed, ironweed, sumac, locust, thistles, blackberry bushes, chicory, and wild roses. The cattle don't just nibble on a few plants, but actually graze them hard.

The following picture is from a herd in Kansas which recently had it's herd instinct rebooted. The rancher call these "peppermint weeds." Prior to having their herd instinct rebooted, cattle wouldn't walk through these weeds, let alone graze them. Rather than grazing through spread out as we are used to, they migrated through as a herd, roughly consuming the top half of the plants on the right side of the picture. 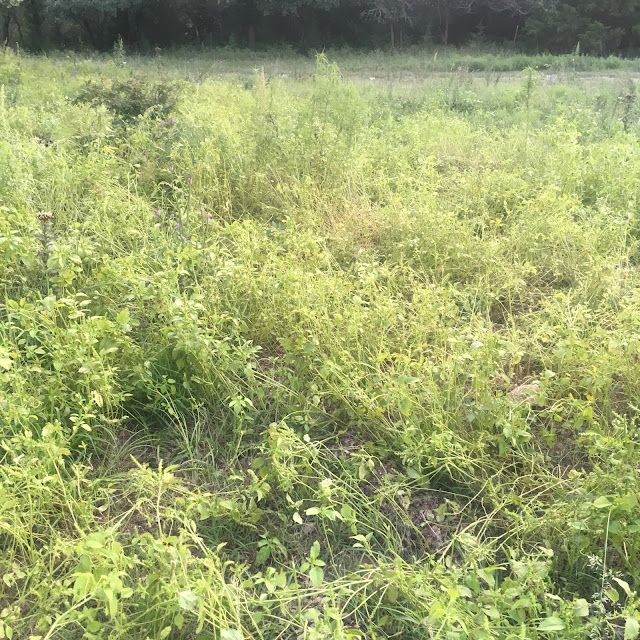 Another weed this rancher has a problem with is hemp.  It was at a coarse stage and the cattle were not interested in grazing it. However, when the cattle were beginning to lie down for their morning rumination,  we spent a short time (perhaps 30 minutes) and drew them into a stand of hemp. After that one time, their preferred spot for their morning rumination is in the hemp. Even though they may not be eating it, they are trampling it down so that the grasses are able to start competing, as in the picture below (the hemp in this spot was head high to a man horseback.) 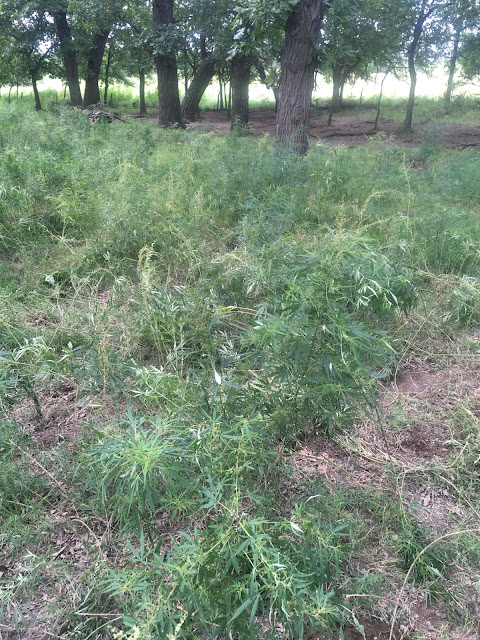 Other than one short session to entice the cattle to ruminate in the hemp, nothing was done to encourage the cattle to trample it, or browse the "peppermint" weeds. The cattle just started doing it on their own as soon as their stress levels were reduced enough for herd instinct to begin rebooting. The only thing that changed was the stockmanship methods of the man handling the cattle. The rest of it was simply the changes it allowed in the attitude of his cattle. They are working, doing weed control for the rancher, without spending a dime on chemicals, fencing or fire. As an added bonus, he is reducing his outputs on supplemental feed and was able to discard part of his water infrastructure.

Posted by Bob Kinford at 7:54 PM No comments: