A recent conversation began with a person complaining that the feedlot he was working in was putting fresh calves on a straight ration without feeding any hay. The participants of this discussion were all men who take pride in handling cattle with the least amount of stress, and keeping their death losses as low as possible. By the end of the discussion, we all agreed that perhaps we were more in agreement with animal welfare groups and food activists than we are with the cattle feeding industry.

The basis of this conclusion stems from what we have been told by nutritionists and feedlot veterinarians that the bottom line shows it is more profitable to push cattle too hard on feed than taking two weeks to start them without the acidosis caused stress and resulting death loss. Aside from the fact that this line of thinking aligns directly with views of PETA, HSUS and natural food activists, it is also dead wrong on the profit/loss margins.

Every animal being treated is a cut into profits, as is every animal that dies. Bud Williams has proven numerous times that it is possible to cut both morbidity and mortality rates in feedlots by 50% just by changing the way cattle are handled.  Despite this, the feedlot industry seems to think they can increase profit by mass treating every pen of calves then pushing them on feed so hard that they are guaranteeing they will lose more cattle and spend more money on drugs (not to mention the overtime for pen riders and hospital crew.)

One study by Dr. Pete Anderson  shows that pens of 700 lb steers with no death loss gained 13% faster and had 9% lower feed conversion values than pens with 2% or more death loss.  There is a direct correlation between morbidity in feedlots with not only cattle handling procedures, but in the acidosis related stress by pushing cattle onto feed rations too fast.

By taking the time to start calves a little slower, and emphasizing low stress cattle handling techniques feedlots would be eliminating half (or more) of their antibiotic costs, over half of their death losses while increasing feed efficiency. This all adds up to higher profits for the feedlots. At the same time, it takes the wind out of the arguments of animal welfare groups and those who want a safer food supply with fewer antibiotics and hormones.
Posted by Bob Kinford at 9:20 AM 16 comments:

Normally sacaton grass is burned off and grazed early in the year as cattle "refuse" to eat it when it gets taller.  Just out of curiosity, I placed roughly half of the 420 cows into a sacaton draw. The results are pretty dramatic and show that cattle really like this grass when it is at a stage where there is green underneath the cured grass. Almost a perfect diet as they are getting roughage and protein in every bite.

As you can see in this picture, this grass appears as if it would be too dry and coarse for cattle to graze... 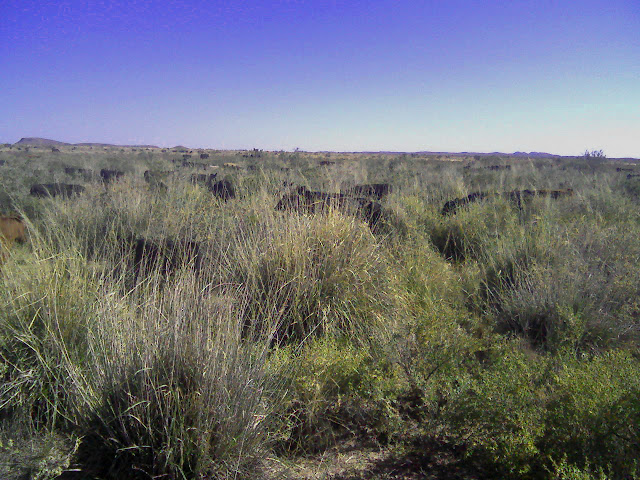 However as you can see by the following picture, that assumption is wrong 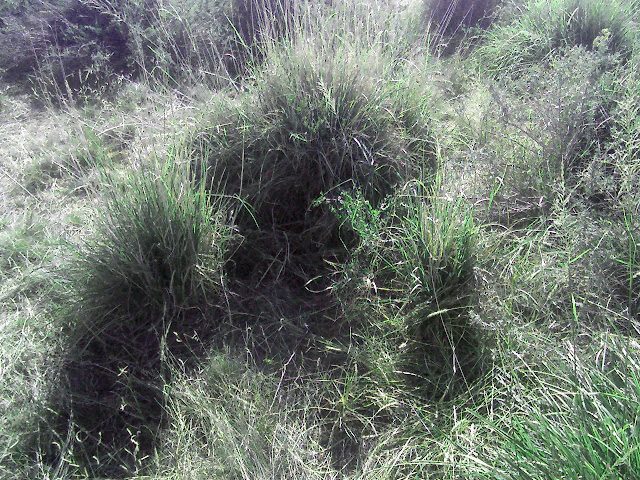 Normally cattle will not graze alkali sacaton on their own at this stage. Yet these cattle, even though they have access to several kinds of gramma and bushy muley in this pasture, had to be pushed out of this area to utilize the rest of it.

From the standpoint of a recreational ranch trying to develop habitat, this is leaving cover for quail while at the same time, creating visibility for them to see approaching predators.