Cows Are Cows No Matter What "Special Circumstances" There Are

Cows are cows. No matter where you go in the world, people will use their terrain or genetics as the reason why they "have" to do things the way they do.  In the last couple of weeks I was privileged to give IMG schools at the Flying W Ranch out of Cedar Point, Kansas a second one on the Justin Rader Ranch for the Hemphill County Agrilife Committee. While the two operations were completely different, the herd instinct was close enough to complete in both herds that the ranchers should have no problem going forward, in spite of the fact the cattle were handled in the same way on both ranches.

The Flying W herd was in just over 2,000 acres, with several dams, and also draws with water. In day one, the herd was scattered, and would graze between stands of ironweed, ragweed, sumac, and locust without eating the grass within these stands, let alone browse the actual plants. By the last day, not only were the cattle grazing the grass in these weeds, they were also browsing them, as evidenced in this picture of where they bedded down on the 4th night. 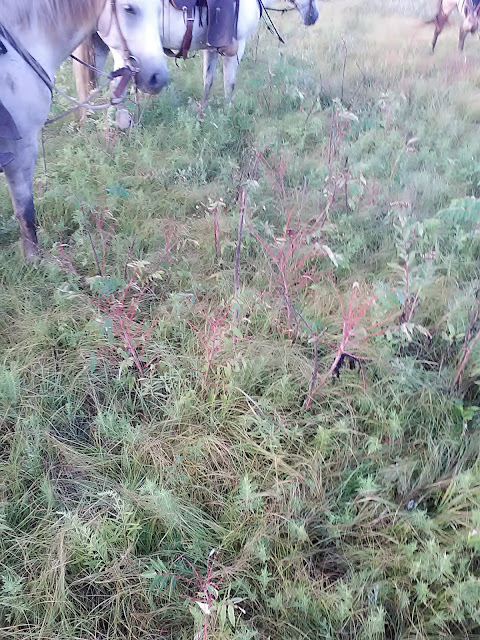 At the end of the school we sent the cattle down a draw containing a lot of brush and weeds. They dropped into the draw and grazed their way to the other end, eating not only grass, but also brush and weeds. Although there were only 120 pair in this herd, the added density from their herd behavior increased the herd impact from a previous estimate of 10,000 pounds per acre to between 100,000 and 200,000 pounds per acre (depending on density of feed to pull the cattle together) 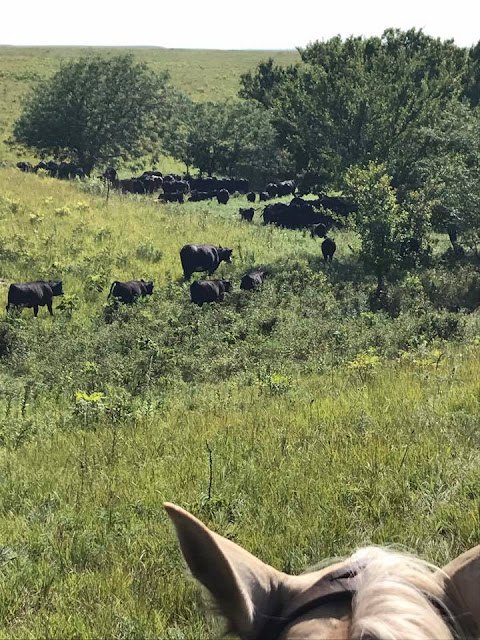 When the cattle were done with this draw, they began grazing back up the side of the hill, and for one last practice of taking cattle through the brush, we sent them through the top end of the draw and on a grazing path down the fence, where we ended the school. It is now going to be a simple process of placing the cattle to graze on the paths they want within the pasture to prevent re-grazing from taking place. 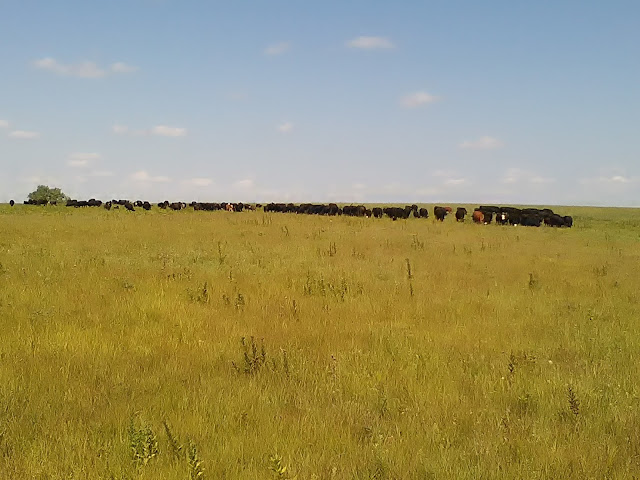 The second school outside Canadian, Texas was a completely different scenario. I stopped by the ranch to check on the situation on my way to the Flying W. The owner had begun multi paddock grazing and informed me that his cattle were drinking at noon and six pm (which I thought was an odd watering schedule.) The morning of my visit there were cows and calves in the waterlot, with cows outside the waterlot, and many (if not most) of the cows bawling, despite the fact no one was doing anything with them. After a few minutes, the cattle in the waterlot left to lay down and ruminate, while the rest of the cattle scattered out across their 20 acre paddock to resume grazing, as shown in the picture below. 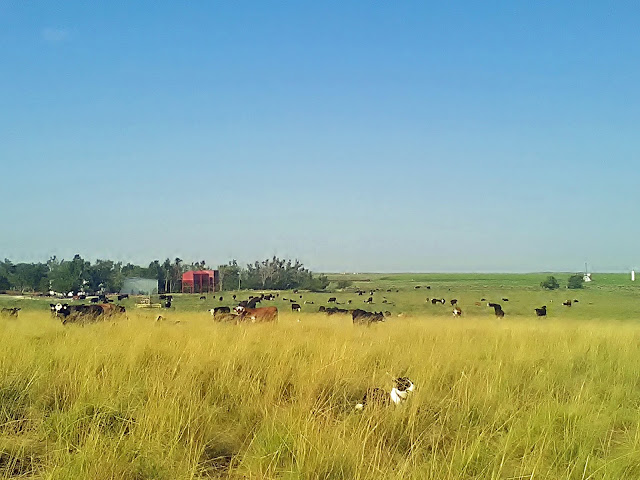 They had turned the cattle into the 30 acre (CRP)paddock we would be working in the evening before the school began. Despite the fact the cattle had only been in the previous 30 acre paddock two days, they had already begun to take a second bite from plants while avoiding others as in the following picture. 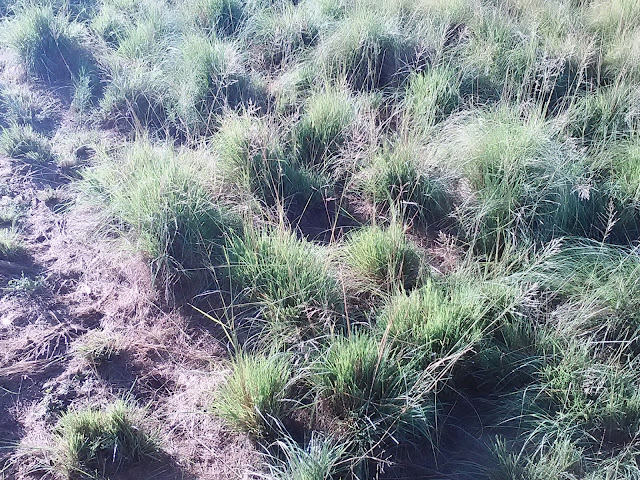 While the cattle responded to the change in handling as the previous set in Kansas, there was a problem in getting them synchronized as a herd into drinking at the same time. The portable system only had a 40 gallon storage with a 10 gpm flow which meant the cattle were going to water at least 8 times a day. On the third day we turned off this system, and ran a hotwire across the end of the previous pasture so we could take them to it through the pens. On the fourth day they dropped from 8 times to water to one, with a few cows in between going to water on their own, yet returning to the herd. On the 5th morning when we were ready to change to the next 30 acre paddock, there was very little evidence of second bites being taken, as in the next picture. 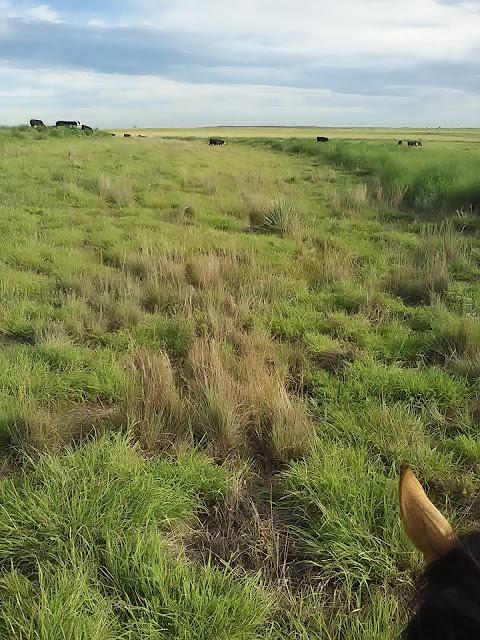 We had a concern when turning cattle into the next pasture that they might start re-grazing the first pasture as (on top of not being synchronized on a drinking schedule) they were having to go back through the first pasture to water, and past the only shade tree available. However the next morning, this is how they were grazing when I left.

After three days of travelling back and forth to water with no supervision the cattle began hanging up at the shade tree in the first pasture, then started back grazing, looser than desired but still following each other around the pasture. All in all, in spite of the lack of synchronization on water this wasn't a bad start. The next few pastures the cattle will not have to pass back through a pasture to water, and will have enough capacity for them to all water at one time. In the case the cattle are still not synchronized on water, after weaning he will be able to drylot the cattle for a day to take care of that problem. After that, it won't take much effort to complete herd instinct to the point they will migrate around his pastures to maximize his herd impact.

On an added note, a student from the Flying W school went home and successfully instilled herd instinct into the cattle he is working with. He let me know that because of the changes he has made in his techniques, that his last pasture move went smoother and easier by himself than it did when he had four people helping him.

Three different situations, with three different set of cows, all with different "problems," yet there was scarcely a difference in their end behavior. That is because cows are cows, and when you treat them right, the problems fade away.
For more information, visit my website.